This Saturday, we are excited to welcome Philadelphia’s own Marisa McClellan, author of the nationally renowned blog Food in Jars, who will be signing copies, in our store, of her debut book of the same name.

Our talented staff member Mandie, inspired by Marisa, gives us this interesting personal vignette of her introduction to canning. We think you’ll enjoy it!

I first became enamored with the idea of canning and home preserving shortly after I started working at Fante’s. I knew nothing about preserving at that time, since no one in my family had ever even considered it, and my interest was piqued when I noticed people purchasing huge amounts of Ball jars, usually at least two to four cases at a time. Curious, I asked one customer what they were planning on doing with all those jars. The customer replied, “I’m canning tomatoes from my garden.”

I was baffled. Why would you do that? You can buy canned tomatoes at the grocery store, I thought to myself. But my curiosity was piqued. As the summer went on, more and more people began buying Ball jars, and I kept asking. “I’m making pickles,” one customer told me, or “I just bought a bushel of peaches, and it’s jam time!” Soon my mind was bursting with inspiration of all the wonderful things I could fill my pantry with. 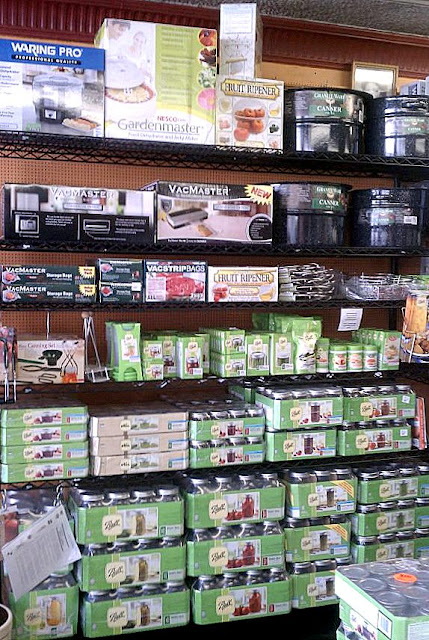 The next summer I stumbled across Marisa McClellan’s canning blog, Food in Jars. Her friendly and encouraging tone made canning sound so simple and accessible. Even in my tiny kitchen with limited counter space, home preserving seemed totally feasible, so I decided to give it a try.

I started my foray into preserving with the simplest of recipes – fridge pickles. Largely following Marisa’s instructions (I improvised just a little), I turned a 5-liter jar full of large kirby cucumbers, red onions, garlic cloves, and dill sprigs into a most satisfying treat.

And it was easy! I simply heated a brine of about one quart water, one quart vinegar, and one cup of pickling salt on my stove top until it boiled and the salt dissolved. Then I poured the hot brine over the fresh cucumbers, sealed the lightning closure on the jar, and stuck it into the back of my refrigerator.

A week later I had a jar full of pickles that could easily rival the big brands. Let’s just say that jar didn’t last long. I was hooked!

Some of Mandie’s creations – Rainier and Bing cherries in light syrup (left), and Balsamic Cherry Preserves

With fridge pickling under my belt, I was ready to take the plunge into serious canning. I started with the most essential tools. I bought myself a large stock pot, a canning funnel, a jar lifter, and several cases of Ball jars. I immersed myself in canning books, blogs, and started asking questions on various forums, including the Food In Jars Facebook page. That’s one thing I love about canning – the canning community is so diverse, and everyone was so quick to offer suggestions and encouragement, I felt like I belonged right away.

Most canning recipes involve sealing the jars in a boiling water bath – a process that first seemed intimidating, though each step soon became routine for me. Say I were to make a jam (my favorite is Honey Lemon Apple Jam). First things first, I fill the canning pot with water and begin to bring it to a boil, doing the same with a small saucepan of water to heat the lids. While the water’s heating up, I wash the jars and lids in hot soapy water, then place them in their respective pots so they can heat up while I prepare whatever recipe is on the table for the day.

On a third burner I start the last pot; this is where the jam is made. After the delicious combination of fruit, sugar, spices, and often times lemon juice (for acidity) becomes a sticky jammy consistency, I’m ready to fill the jars.

Carefully, using my jar lifter, I remove the hot jars from the canning pot and place them on a dish towel. After wiping them with a clean towel, I place the canning funnel on top and ladle the jam in, leaving about a half-inch of head space. After the jars are filled, I remove the lids from the water with a lid lifter, place the lids on the jars, and screw on the bands til they’re “fingertip tight.” Finally, the jars are placed back into the boiling water bath for processing. (Processing times vary by recipe, of course, and they also vary by altitude, though this didn’t affect me.)

That summer I delved into all sorts of canning projects, from cherries and peaches to cucumbers and carrots. I made jams, preserves and pickles until September, and my pantry was brimming with beautiful jars. To my (and I hope their!) delight, I was able to surprise everyone on my holiday list that year with a little taste of my canning efforts.

Marisa’s new book Food In Jars is a must for home canners!

This summer will be no different, as I cram my pantry full of preserved goodies. I’ve already “put up” six half-pints of Rhubarb Jam with Strawberries & Oranges, three pints of Pickled Asparagus, and three half pints of Sour Cherry Jam, and it’s only mid-July! (I found these three fabulous recipes, and many more, in Marisa’s new book.)

This Saturday is National Can-It-Forward Day, a celebration of the joys of home canning. There will be canning demos streaming live from Ball’s website, Fresh Preserving, all day. (Ball jars, by the way, are made in the USA.)

If you’re in the Philly area, you can take part by stopping into our store, where Marisa McClellan will be on hand, signing copies of her book, sampling some delicious jams and pickles, and answering all your canning questions. We’re even holding a giveaway drawing for a free canning starter set including a set of Ball canning jars, canning labels, and fruit pectin!

If you’ve ever thought you might like to try canning, now is the time! We’ll see you on Saturday!