The origins of ice cream date back to the 13th century, or even earlier, from mountainous regions of ancient China. Today, it’s one of the most popular desserts throughout most of the world. Here is some information on making ice cream, tools, and recipes.

And you can avoid the stabilizers and artificial coloring that are part of most commercial ice creams.

The easiest way to make it is with an electric ice cream maker. The refrigerated units are like mini freezers; just plug them in, allow cooling to occur, place your ingredients in a bowl, and the ice cream is ready within 20 minutes.

The electric ice cream makers that contain a freezing liner are just as quick. Freeze the liner/container overnight, place it in the ice cream maker, add the ingredients, and the stirring is done for you.

The modern manual ice cream makers that contain a freezing liner work just like the similar electric ones, except that you have to stir every few minutes. It is most important to stir the mixture while the ice cream is freezing. For one, the ice crystals that form along the metal container need to be scraped off. Also, it is important to stir in from 10% to 25% volume of air into the mixture for proper freezing and texture.

The old fashioned ice cream makers require rock salt and ice in the tub surrounding the freezing container. (This lowers the melting temperature of the ice.) The wonderful thing about these is that you can make great quantities at once, and they are relatively inexpensive to boot.

Ice cream is best stored in an airtight container in the freezer. It picks up other flavors fast, so eat it within a week or so. Freeze it in ice pop molds, like the one at right, to make it easier for the kids to handle.

How Frozen Foods are Defined

Ice Cream – Ice cream is made from cream, milk, sweeteners, flavorings, stabilizers, and emulsifiers. To be shipped in interstate commerce, it must contain at least 10 percent milk-fat.

Low-Fat Ice Cream – Low-fat ice cream, or ice milk, is made from milk, stabilizers, sweeteners, and flavorings, and contains not more than 3 grams of fat per 4-ounce serving. Ice creams advertised as “reduced fat” or “light” must have a lower fat content than “regular” ice cream, but may not meet the standard for “low-fat.” Soft-serve frozen desserts are similar to low-fat ice cream, but are specially processed.

Sherbet – Sherbet, made from milk, fruit or fruit juice, stabilizers, and sweeteners, has about twice as much sweetener as ice cream. It must have 1 to 2 percent milk-fat.

Italian Gelato – It cannot be called Ice Cream because of its low fat content. Gelato is generally made with whole milk and maybe a little cream, for a total fat content of about 2-8% (vs 15-20% in ice cream). It is dense and creamy because it is not aerated, so it usually only contains 15-20% air (vs up to 50% in ice cream).

Besides milk, and sometimes cream, gelato usually contains sugar and perhaps also eggs. With little cream to disguise it, much of its great taste comes through from the fresh added ingredients.

Gelato can be made by hand, or more easily by using an electric ice cream maker.

Ask Nina Rose:
“How do I prevent ice crystals from forming in my homemade ice cream?”

Here are some basic tips.

First, use ingredients that have a high fat content, like whole milk, half-and-half, cream and egg yolks. These ingredients have lower water content than the low fat options (skim, 1%, 2%, nut and soy milks, to name just a few). The less water present, the less chance for frozen ice particles to form. Higher levels of sucrose, or sugar, will also slow the formation of ice (although too much sugar can cause quick melting, so experiment to find the right amount to perfect your recipe).

Second, always fully chill the mixture (most recipes suggest 8 hours to overnight). If there are any traces of heat, it can cause melting when you go to churn the mixture. Any melted ice cream that is moved to the freezer from the bowl will create ice chunks, so be sure to freeze it right away!

Always use large, shallow containers rather than small, deep containers when transferring churned ice cream to the freezer to harden. This will allow the ice cream to freeze faster and stay creamy. Placing plastic wrap or wax paper on top of the mixture before closing the container’s lid will prevent a layer of frost from forming on top.

Lastly, experiment with stabilizing ingredients like carrageenan, xanthan gum, guar gum, lecithin, locust bean gum, and even gelatin! These are all additives that are derived from ingredients found in nature, and they all have properties that inhibit the crystallization of ice. Folks wanting to make ice cream with low-fat and non-dairy milks will find these ingredients invaluable when trying to achieve a creamy texture that’s almost impossible without it.

THE SCOOP ON THE SCOOPS

The scoops that work best, under most circumstances and in our experience, are the liquid-filled ones. The heat from your hand keeps the surfaces of the scoop warm and prevents ice cream from sticking to the bowl, so it is easier to serve.

Instead of scraping, I like to dig the tip of the scoop into the ice cream, then I turn the bowl so as to surround and separate a ‘ball’ of ice cream. Like with a melon baller. Use of a spade works best for scooping large quantities at a time. 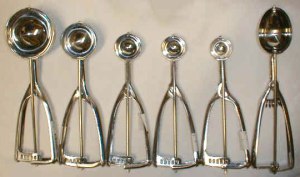 Protect yourself from the danger of possible Salmonella infection by using a homemade ice cream recipe made with a cooked egg base, commercial PASTEURIZED egg substitutes or without eggs. Egg mixtures used in making cooked bases for ice cream are safe if they reach 160° F when tested with a thermometer. At this temperature, the mixture should coat a metal spoon.

Combine ingredients and stir briskly about two minutes until sugar is dissolved. (Undissolved sugar crystals may be a cause of large ice crystal formation.) Pour into a 1-gallon ice cream freezer can and freeze according to manufacturer’s directions.

In medium saucepan, beat together eggs, milk, sugar, honey and salt. Cook over low heat, stirring constantly, until mixture is thick enough to coat a metal spoon with a thin film and reaches at least 160°F.

Cool quickly by setting pan in ice or cold water and stirring for a few minutes. Cover and refrigerate until thoroughly chilled, at least 1 hour.

Note: The National Honey Board advises that Any recipe containing honey should not be served to children under 1 year of age.

Chocolate: Add 3 squares (1 oz. each) unsweetened chocolate to egg mixture. Cook, cool and freeze as above.

How to Order Ice Cream Makers and Tools