Pasta making implements have been around for a long time. When it comes to spaghetti, among the oldest of tools for cutting many thin strands at once, is the Chitarra (pronounced key-tahr-rah). Evenly spaced wires cut spaghetti from a sheet of dough that is rolled on them. An important symbol of the Abruzzi region of Italy, the Chitarra originated around 1800 in the province of Chieti, and is still in common use today. 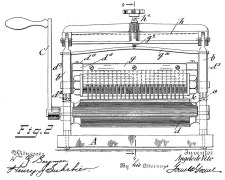 The first Mechanical Home Pasta Maker model was able to flatten dough and cut it into strands. It is credited to have been manufactured by the Ohio based Vitantonio Mfg. Co. in the same year Fante’s was founded. Angelo de Vito patented his designs in 1906 (U.S. Patent 812704) and in 1920 (U.S. Patent 1332435).

Pasta Extruders were already well known in Southern Europe during the days of Thomas Jefferson. A screw with a threaded plunger was turned in a tube filled with dough, and extruded through a die at the other end. The Bigolaro is an example of a pasta extruder that was designed in the late 1800’s and still bears the same form today.

The first Electric Extrusion Pasta Machine for the home was patented by Alfredo Cavallo in 1980 (U.S. Patent 4219318), and widely marketed under the Simac brand. Along with the convenience of automatic kneading, a variety of extrusion discs made it possible to make ultra-thin strands as well as tubular and other non-flat pasta forms.

And then there are Dough Shaping Machines, as for forming cavatelli and gnocchi. Vitantonio patented a design in 1922 (U.S. Patent 1424806) that has not changed much to this day. A rope of dough feeds into an angled rolling platform blade, cuts pieces, and rolls them against a patterned surface.

♦ Rolled pasta is about half as dense (twice as light) as extruded pasta, which makes it better able to absorb sauces, and has a more delicate taste.

♦ The thickness of rolled pasta can be controlled from paper-thin to cookie-thick, whereas the size of available dies determine the thickness of extruded pasta.

♦ Rolled pasta generally cooks in less than half the time that it takes for extruded pasta.

♦ Shapes of pasta are quite diverse. Check out these links for images and descriptions of many different pasta shapes and names.
Pasta Shapes from Cook’s Thesaurus
About.com’s Pasta Shapes Glossary
Food Info’s Pasta Shapes
Wikipedia’s Pasta

Flour liberally
Avoid sticking by flouring the dough well before rolling.
Brush and scrape
Wipe off flour with a pastry brush.
Use a plastic scraper to remove any sticking dough.
Never wash
Keep the pasta maker away from any kind of moisture.
Lubricate
Lubricate from time to time, depending on the humidity in your environment:
Place a drop of mineral oil where each roller meets the body.
With a Chitarra, wipe the wires with an oil-dampened cloth.
Storage
Store in the original box, in a dry place.
Repairs
We don’t recommend taking pasta makers apart. Contact us or the manufacturer.

How to Order a Pasta Maker